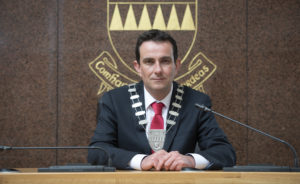 Cllr Moloney has been a Fianna Fáil county councillor since 2014 and a former member of Listowel Town Council. He is an active member of Listowel Tidy Towns and many other community and sporting organisations. His grandfather, Dan Moloney, was a TD for Kerry North between 1957 and 1961 and he later served as a member of Seanad Éireann.

‘It is an honour to have been elected Cathaoirleach of Kerry County Council today at the iconic Austin Stack GAA Grounds in Tralee,’ said Cathaoirleach Moloney.

‘The large open-air setting allowed us to meet safely and to ensure that the public health guidelines could be adhered to. I want to thank the Kerry County Board of the GAA for facilitating the meeting.

‘It is also a historic meeting given the political significance of Austin Stack in the history of our county. He represented Kerry in Dáil Éireann between 1919 and 1927 and was the first Kerry person to serve in government, as Minister for Home Affairs from November 1919 to January 1922,’ said Cllr Moloney.

The chairman of the Kerry County Board of the GAA, Tim Murphy said: ‘The GAA in Kerry is delighted to host the annual meeting of Kerry County Council today especially given the long and close connection between our organisation and the local authority.’