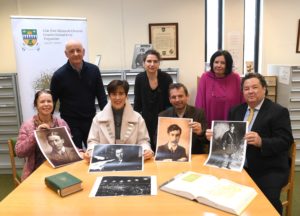 An exhibition to mark the centenary of the 1918 general election and the First Dáil will be officially opened by the Cathaoirleach of Kerry County Council on Saturday, 8 December at Tralee Library. The exhibition will feature information on the four Kerry men who were elected MPs at the December 1918 election and subsequently took their seats in the newly established Dáil Éireann.

Present for the launch were descendants of three of the TDs – Eddie Barrett, a grandnephew of Austin Stack; John Beazley, a cousin of Piaras Béaslaí; and Clementine O’Keeffe, a granddaughter of James Crowley. Also present were Caroline Lynch of the Arts Office/Creative Ireland Kerry/Commemorations Office and County Archivist, Michael Lynch.

Stack (West Kerry), Crowley (North Kerry), Lynch (South Kerry) and Béaslaí (East Kerry) were each elected, unopposed, to the House of Commons on 14 December 1918 but declined to take their seats, choosing instead to sit as members of the First Dáil. Béaslaí was the only Kerry TD present with the Dáil met at the Mansion House on 21 January 1919 – the others were in jail – and he read the Democratic Programme of the Dáil to those present.

Information panels – featuring details of the four TDs as well as the foundation of the First Dáil – will be unveiled at Tralee Library on Saturday, 8 December at 10.30am and will be open to the public over the coming months, with the capacity to have the display moved to other locations around the county. Anyone interested in attending the launch should please RSVP to [email protected]. All are welcome.

‘As we approach the centenary of the seminal 1918 general election and the foundation of Dáil Éireann, it is important that we acknowledge the role played by the four Kerry men who were part of the First Dáil and who made their contribution to the foundation of an independent parliamentary democracy,’ said the Cathaoirleach of Kerry County Council, Cllr Norma Foley.

‘I hope that people will engage with this bilingual exhibition which will be of interest to anyone wanting to learn more about the events of a century ago and the four Kerry men who were the county’s first representatives in Dáil Éireann,’ she said.

Relatives of the first Kerry TDs as well as former TDs who represented Kerry, and their relatives have been invited to the opening of the exhibition which is open to the public.