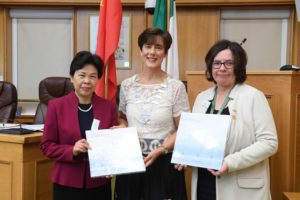 A delegation from the Zheijiang Province in eastern China visited Kerry on Friday. The province has a long-standing relationship with Kerry following the establishment of cultural and educational links in 2012 and a Cultural Festival hosted in Tralee in 2015.The political and economic delegation met with the Cathaoirleach and Chief Executive of Kerry County Council as well as a number of local industry and business representatives. The group was led by the Chairman of the Zheijiang Provincial Committee of the Chinese People’s Political Consultative Conference, Ms Ge Huijun. The Chairman and Cathaoirleach exchanged gifts and pledged to further develop links between Kerry and Jheijiang. The Chinese group also visited IT Tralee and Kerry Group.

The Zheijiang Province is home to 65 million people and is renowned for its tourism sector and entrepreneurial spirit. Zheijiang Province and Kerry have had a strong relationship over the course of many years. In May 2012, a delegation from Zhejiang visited Kerry County Council to explore links with Kerry and also to promote co-operation in the fields of education, tourism, science and technology, culture and economic development.

A return visit was made by representatives of the Council in 2013 and that delegation was led by our County Manager at the time, Mr Tom Curran. During that visit, a Memorandum of Understanding was signed, formalising the links between the regions.

Following on from that visit in 2013, the Confucius Institute at University College Cork were contacted regarding a Chinese language and cultural programme for interested schools and Kerry schools were contacted with a view to linking them with schools from the province and building long-term relationships. Six Kerry second-level schools participated, and students not only learned some daily Chinese, experienced the differences between Chinese and European language, but also got to know Chinese society and culture.

Apart from those educational links, as part of the ongoing development of this relationship, a Cultural Festival was organised in Tralee in July 2015. The Vice‐Governor of the Province and the Chinese Ambassador to Ireland, visited Tralee to officially open the festival. An exhibition titled the ‘Zhejiang Re‐Design Exhibition’ took place in Kerry County Museum and a traditional Chinese music concert with the Butterfly Troupe took place in Siamsa Tíre. The Butterfly Troupe is a traditional Chinese orchestra affiliated with the Zhejiang Opera and Dance Drama Theatre.