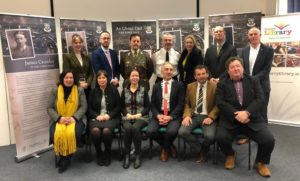 Relatives of the four Kerry men who were elected MPs a century ago this week and who went on to sit as members of the First Dáil recounted the stories of their ancestors at the official opening, on Saturday at Tralee Library, of a new exhibition to mark the centenary of the 1918 general election and the First Dáil.

Austin Stack (West Kerry), James Crowley (North Kerry), Fionán Lynch (South Kerry) and Piaras Béaslaí (East Kerry) were each elected, unopposed, to the House of Commons on 14 December 1918 but declined to take their seats, choosing instead to sit as members of the First Dáil. Béaslaí was the only Kerry TD present when the Dáil met at the Mansion House on 21 January 1919 – the others were in jail – and he read the Democratic Programme of the Dáil to those present.

Leas Cathaoirleach of Kerry County Council, Cllr John Joe Culloty, opened the exhibition, saying ‘I am really delighted that Kerry County Council is hosting this exhibition and I hope that people will engage with it to be informed and enlightened about the events of a century ago and the people who played such an important role in our history.’

Mary Lynch, granddaughter of Cumann na nGaedheal minister, Fionán Lynch, described the phonecalls ‘as Gaeilge’ between her grandfather and Éamon de Valera, who remained friends despite being in different parties. James Crowley’s granddaughter, Clem O’Keeffe recalled his reputation as a vet and his love of horses and how he wooed his wife Clementine Burson by arriving at her home on a white stallion.

Eddie Barrett recounted the GAA profile of his granduncle Austin Stack and his Fenian pedigree through his father, William Moore Stack, while John Beazley described how remarkable it was that his cousin, Piaras Béaslaí, who was born in Liverpool, ended up representing East Kerry in the Dáil ‘with a soft east Kerry accent,’ despite not wanting to be a politician.

The display is open to the public at Tralee Library and a limited edition commemorative booklet is also available to those visiting the exhibition. The event was made possible with the support of Creative Ireland and the Department of Culture, Heritage and the Gaeltacht.