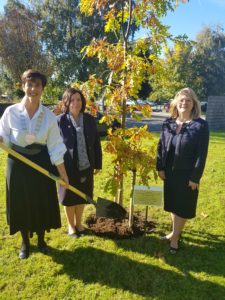 A tree has been planted in the grounds of County Buildings in Tralee by the Cathaoirleach of Kerry County Council to mark the centenary of the extension of parliamentary suffrage to women in 1918. Cllr Norma Foley planted the oak tree at Áras an Chontae this afternoon to mark the one hundredth anniversary of the first general election in which many Irish women were entitled to vote for the first time.

In February 1918, the Representation of the People Act extended the vote to all men aged at least 21 and women aged 30 or older who were university graduates or owned property. The general election of 14 December 1918 was the first occasion on which women in Ireland were entitled to vote in a parliamentary poll.

‘As Cathaoirleach of Kerry County Council, I was pleased to mark this important centenary by the symbolic planting of a tree in the grounds of Áras an Chontae,’ said Cllr Foley.

‘The enfranchisement of women in 1918 was an important first step to achieving full suffrage for women in Ireland and is one of the many important centenaries that occur at this time.

‘This centenary is also an opportunity to honour the women who have served as members of Kerry County Council over the past century. While women were eligible to vote and stand in local elections from 1899, it was 1920 before a woman was first elected to Kerry County Council. Albinia Brodrick (Gobnait Ní Bhruadair) was a councillor from 1920 to 1926 and was followed on the council since then by 17 other women who have all played a role in shaping our county and our society.’

‘I hope that this tree will serve as a symbolic memorial of the centenary of the first extension of the parliamentary vote to women in this country,’ said Cllr Foley.