Opening Hours of the Park

Tralee Town Park is a public park located in Tralee, County Kerry and is one of the largest urban public parks in Ireland. It is situated in the heart of the town, just off Denny Street and adjacent to the Kerry County Museum

Introduction to Tralee Town Park
As well as being the home of Ireland’s National Folk Theatre ‘Siamsa Tíre’, the park covers 35 acres and comprises manicured gardens, walkways (5km in total), a wide array of tree species, a fountain, a community garden, a large playground and much more.
Pearse Park (or ‘Páirc an Phiarsaigh’) – named after republican political activist and revolutionary Patrick Pearse – is a small part of the park separated by Ivy Terrace and Denny Street. Pearse Park features flag masts and a monument, in honour of Patrick Pearse, as well as ample seating areas and green space.

History of the Park
The park, locally known as “The Green”, is situated on the site of the old castle demesne which was built by the Denny family in the 17th and 18th Century. In 1826, the castle was demolished to make way for the construction of Denny Street. Edward Denny subsequently landscaped the area remaining from the castle by planting trees, laying down several gravel paths and constructing an ornamental grotto. A gatekeeper’s lodge was also built on “The Green”. In 1889, Edward died and the Denny family sold “The Green” to Henry Clements-Finnerty.

Around this time “The Green” was offered to the Town Commissioners but they refused to purchase the park. Subsequently, fencing and gates were erected around the park’s perimeter (still seen to this day) and a charge to the public for admission into the park was introduced. In 1922, “The Green” was sold to Tralee Urban District Council and it officially became Tralee Town Park.

The Garden of the Senses
The Garden of the Senses was designed to appeal to the five senses and to be inviting to all members of society. The project was inspired by Soroptimist International Tralee & District, under its then President Maura Baily, in 2000. The garden places strong emphasis on ancient Hanley history of Ireland.
Highlights include the Standing Stone, the Cauldron of the Dagda, Bronze Age horns and much more.

The Rose Garden
The Rose Garden has been a feature of the park since 1987 and contains 35 varieties of roses over a 3-acre site. These add significantly to the aesthetic appeal of the area. The renowned garden is located in the north-western area of the park.

The Rose Walk
The Rose Walk in Tralee Town Park is dedicated to the 2011 Washington DC Rose Dorothy Moriarty Henggeler who died from a brain haemorrhage in 2014. The walk begins at main entrance on Denny Street and stretches all the way through the park, running on to the Dan Spring Road adjacent to the main entrance of the Rose Hotel which is owned by Dorothy’s parents, Dick and Eibhlin Henggeler. Along the walk there is also a stone memorial to Dorothy.

This leisurely stroll provides connectivity from the Rose Hotel to the town centre and allows one to observe the park’s famous Rose Garden, water fountain and children’s playground area as well as the broad array of tree species throughout the park. 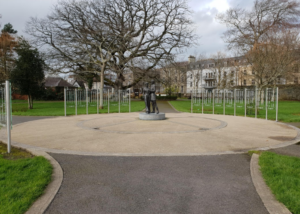 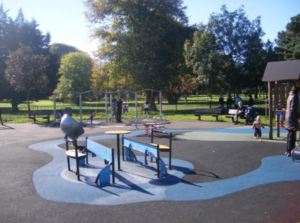 equipment. Equipment includes: pyramid rotator, basket swing, multi-units (sheltered huts with slides), zip line, overhead rotator, fireman’s poles, tyre swing, flat swing, swings, 3-seat rocketer, dish roundabout and a toddler unit.
Ancillary structures such as new boundary fencing, gates, signs, seats/benches, bins and paths were added to the playground area during its 2009 re-development, which turned out to be very successful. It is now a very modern and well-used amenity in the town park.
In Autumn 2019, a further €47,000 extension was carried out on the playground and officially on January 24th 2020. Kerry County Council worked closely with local schools and Enable Ireland to develop the inclusive and accessible facility.

There are several events held in the Town Park every year. These events are well advertised in local newspapers and on Radio Kerry. Events include, but is not limited to, the following: