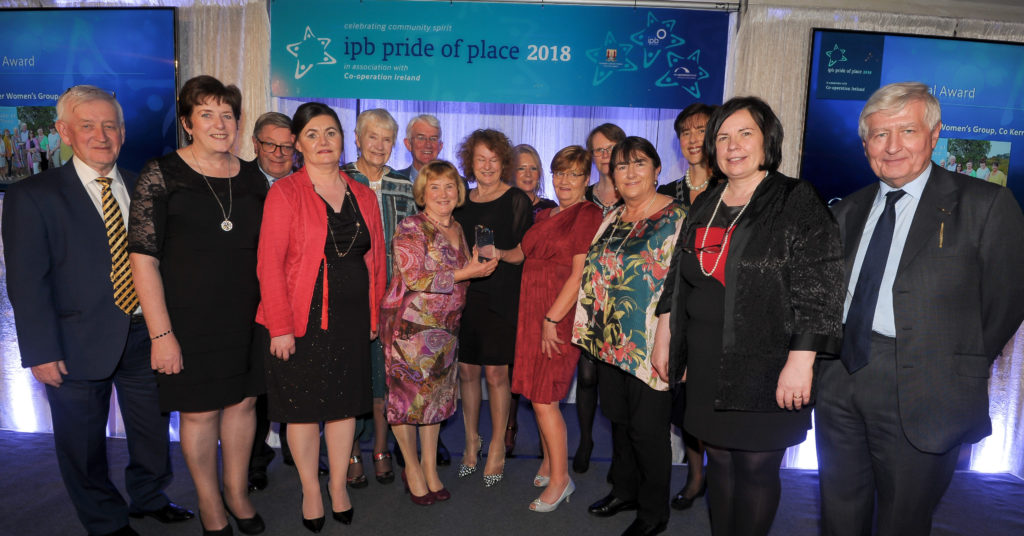 The Cathaoirleach of Kerry County Council, Cllr Norma Foley has congratulated the three Kerry community groups which were honoured at the annual Irish Public Bodies (IPB) Pride of Place awards held in Cork City Hall on Saturday evening. Blackwater Women’s Group and Maharees Coastal Area received a Special Award for their work while Killorglin’s K-Fest was runner-up up in the Creative Place Initiative category.

The judges said the Blackwater Women’s Group was a ‘vibrant community group making a real difference in peoples’ lives as they have succeeded in combatting loneliness through the extraordinary actions of a number of dedicated people.’

The judges were equally impressed with the Maharees competition entry stating that the Maharees is ‘notable not just as an area of great natural beauty but distinguished by a dedicated local group working to ensure a sustainable approach to conservation that is exemplary and a model for others to follow.’

Members of the groups joined with 800 community heroes from across the country at the awards which are operated in association with peace building charity Co-operation Ireland. The awards were attended by Cathaoirleach Foley and the Chief Executive of Kerry County Council, Moira Murrell.

The Pride of Place awards, described as the ‘Oscars of the Community Sector’, celebrates the often unsung work of community groups that selflessly work to make local neighbourhoods a better place to live in, work in or visit. Organised by Co-operation Ireland and sponsored by IPB Insurance, the Pride of Place awards sees the country’s local authorities, on both sides of the border, nominate outstanding projects that contribute to civic pride.

Cllr Foley said the three award-winning groups had done Kerry proud and epitomised the very best of community initiatives which are happening across the county.

Chairman of IPB Insurance George Jones said: ‘Pride of Place is an important platform as it recognises those who give freely of their time to make where they come from a better place to live and work. It is clear that working together and getting things done increases people’s pride in where they live and in turn helps build vibrant sustainable communities.’