The Kerry International Dark Sky Reserve has been designated Irelands first International Dark Sky Reserve and is one of only three gold tier reserves on the planet and the only gold tier reserve in the Northern Hemisphere.
It is also the only ‘living’ reserve on the planet where locals live and work in the reserve, under a blanket of stars!
The reserve includes the following areas in South Kerry: Kells, Caherciveen, Portmagee, Valentia Island, The Glen-St. Finian’s Bay; Ballinskelligs; Waterville; Caherdaniel and Dromid.
Visit this region of Kerry for spectacular views of the Milky Way, the Andromeda Galaxy, Star Clusters and Nebula and much more…..enjoy the dark side of Kerry!

Star Power was held at Colaiste na Sceilige, Cahersiveen on Saturday 28th November 2015. This was a very well attended event – an initial stepping stone on the way to developing, to its full potential, South Kerry’s Dark Sky Reserve. Below are links to the presentations that were given by guest speakers, which were both interesting and informative. Kerry County Council, the Destination Kerry Tourism Forum and Failte Ireland are committed to working with the local community in South Kerry on the development of a Strategy for the Reserve. 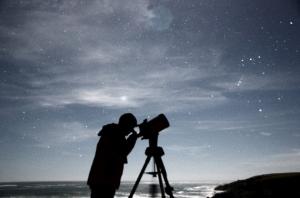 Or if you’d prefer to see movie stars! Kerry magestic landscape, warm welcome and long tourism tradition, has enticed and inspired film makers worldwide.  Ryans Daughter and Far and Away – (An Daingean, Dingle); The Playboy of the Western World (Inch Beach) and the new Star Wars Episode 7 movie where scenes were filmed on Skellig Michael Skellig Mhicil; Harry Potter & the Half Blood Prince where scenes were filmed on Lemon Rock off South Kerry – just some of the movies where Kerry’s stunning scenery was showcased to moviegoers across the world.